How do you evaluate something that has never been done before? This was the challenge that 14-18 NOW posed with ‘We’re here because we’re here’, a modern memorial performed throughout the UK on 1 July 2016 to commemorate the centenary of the Battle of the Somme.

‘We’re here because we’re here’ was commissioned by 14-18 NOW as part of their five-year programme of extraordinary arts experiences connecting people with the First World War.

Conceived by Turner Prize-winning artist Jeremy Deller, the project was delivered through a unique cross-sector collaboration involving 14-18 NOW and 26 national and regional theatres across the UK. 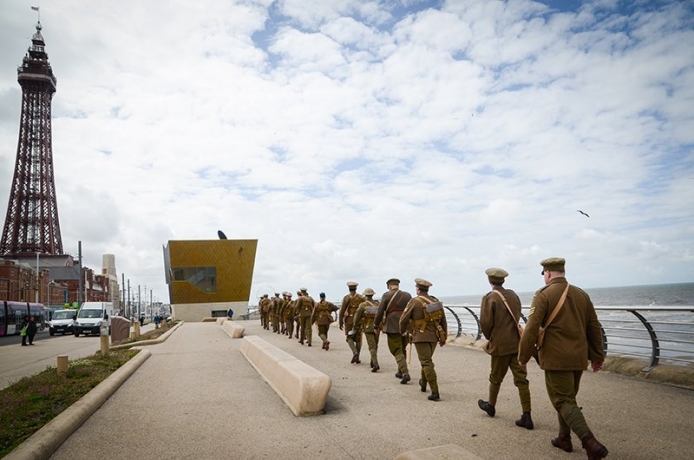 Planned in total secrecy, 1400 voluntary participants dressed in First World War uniform appeared unexpectedly in locations across the UK; these ‘ghost soldiers’ were seen in train stations, shopping centres, mountains and industrial estates. A profound response saw 63% of the UK population aware of the project, two million people experience it live and 28 million via the media.

How to capture total impact?

To capture the total impact of the project, MHM worked with 14-18 NOW to develop an evaluation framework that would encompass the experiences of the audiences, volunteers, theatres and artists. Through a programme of in-depth interviews, video diaries, workshops, voxpops and surveys we achieved a rich 360-degree view of the ‘event’ and all those who were involved.

‘I felt quite emotional when I first saw them this morning, and when I realised what it was about, I was holding back tears for a while, and I was just really sombre for a good hour or so.’ 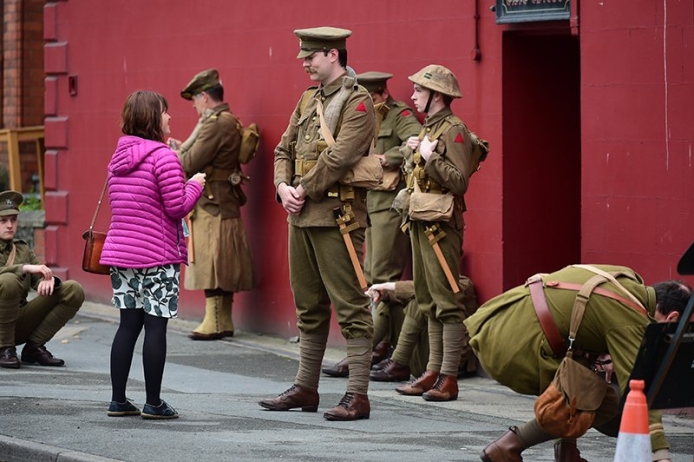 The immediacy of the audience experience

On 1 July 2016, we stationed interviewers up and down the UK to carry out vox pop interviews with members of the public who encountered the ghost soldiers. Interviewers approached people who they saw had stopped to watch and engage with the performance and who were starting to leave. This allowed us to capture the immediacy of the audience experience without interfering with it.

Afterwards, a question was sent to a panel of people representative of the UK population to gauge their experiences. We also carried out social media analysis to quantify digital reach and capture the digital experience.

We discovered the audience was mesmerised and deeply moved by the experience. Being confronted by living, breathing young men in everyday places impacted on the audience in ways that statistics never could and helped remind them of the reality of what each life lost on the first day of the Battle of the Somme really meant.

The project moved audiences who had never engaged with the Battle of the Somme before and changed perceptions of commemoration and memorials. People were stopped in their tracks, some moved to tears and 330 million impressions of the event were made on social media.

“It’s the way they make eye contact with you … it really hammers home that you’re remembering real people.”

The personal journeys of the volunteers

Participating in ‘We’re here because we’re here’ was a profound experience for many of the volunteers. They represented a range of ages and backgrounds, including students, civil servants, sales assistants, aspiring actors and firefighters. Beginning months before the performance date, they attended weekly rehearsals and were given the identity of a real soldier who died in the Somme. On 1 July, they rose, donned their period uniforms and became someone who had died 100 years ago.

Anticipating that volunteers would experience a personal journey as a result of the project, we asked some to keep video diaries, interviewing them before and after the experience. Many participants cited having grown in confidence and become more outgoing. There were examples of personal networks that were strengthened and expanded. Volunteers were also asked to complete an online survey after the event. Over 98% agreed that they felt proud of what they had achieved and that they felt like they were part of a real artistic experience.

The experience of the theatres and artists

‘We’re here because we’re here’ was a cross-sector collaboration between visual artist Jeremy Deller, the three National Theatres in England, Wales and Scotland, and 23 national and regional theatres. 14-18 NOW were keen to know what the experience was like for their partners, and whether it would strengthen partnerships amongst them.

We conducted a series of in-depth interviews, evaluation workshops and a survey with those involved, revealing that the project had indeed strengthened partnerships.

Even the highest expectations were exceeded in all areas of the project. 83% of staff expected to feel inspired and 79% expected to feel excited but 94% and 96% experienced these outcomes respectively. Many benefited from professional development and new thinking about their practice.

The viral nature of the project was its most unexpected aspect. 66% of those involved in creating ‘We’re here because we’re here’ gained new insights into the use of social media to capture audience response (compared to only 18% who had anticipated this).

The most profound outcome for the participants and the staff and other volunteers was the human benefits of being involved in a project that was such a big unified collaboration and had such meaning for those involved.

Pioneering a new way of memorialising

‘We’re here because we’re here’ broke truly new ground in engaging people with the heritage of the First World War through an astonishing public art performance, delivered on a single day, on a national scale. It illustrated how museums and heritage organisations can harness the public realm and the phenomenal power of digital media to engage the widest possible public with a battle and a war that took place 100 years ago.

“MHM rose to the evaluation challenges of this innovative, UK-wide project with tenacity and creativity. They provided both robust data on audience reach and deep insight into the experience of and impact on the producers, artists, volunteers and audiences who created and engaged in this unique event, which saw 30 million people connect with the heritage of the First World War.”