Colston Hall - what's in a name?

For years, Colston Hall was a lightning rod for disquiet over the city’s continued celebration of its slave trading past. It needed a brand strategy, fuelled by audience insight, that would assure Bristolians it was the progressive arts organisation it believed itself to be.

How can an organisation that is seen as unapproachable and exclusive start to open up to its city and communities? What if you throw in a controversial, problematic, historic name into the mix? 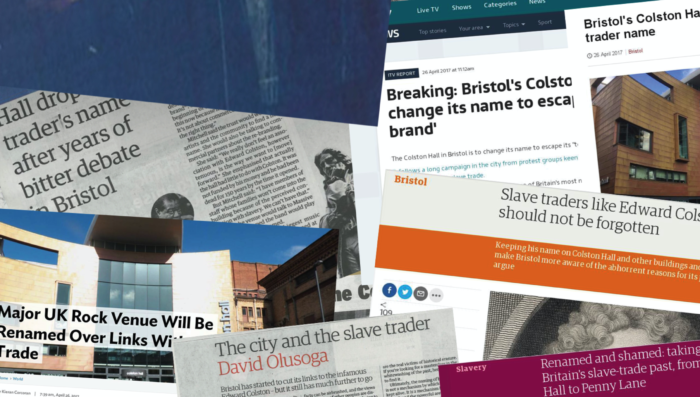 Colston Hall was a live music venue in the heart of Bristol. It strived to promote unity and joy through live music with a diverse programme of concerts, participatory opportunities and education work.

However, like many places in the city, Colston Hall shared its name with a philanthropist and slave trader, Edward Colston.

In 2020, Colston’s statue was famously pulled down during the Black Lives Matters protests but, for years before that, the negative connotations around the name have overshadowed Colston Hall. It was a significant barrier to the organisation’s ability to be reflective of Bristol and its people, and a place where everyone feels they belong.

When in 2018 Colston Hall closed for a two-year, £48.8 million renovation its Board announced that when the Hall reopened it would have a new name.

CEO Louise Mitchell acknowledged it was an extremely emotive issue for the city:

“We know some people won’t like this move but […] the name Colston does not reflect our values as a progressive, forward-thinking and open arts organisation. We want the whole city to be proud of its transformed concert hall. It wouldn’t be right to reopen the building, using £48.8million, some of which is public money, under the name Colston.”

But choosing the new name was to be only the final stage in the process. Colston Hall approached MHM because they were determined to build an organisation – both physically and by reputation – that was for all of Bristol.

“As a publicly-funded organisation it was important that the bold decision to change the name was not interpreted as riding rough-shod over the accountability we have to our audiences, our partners, our stakeholders and our city. There were numerous questions we needed to ask ourselves and our audiences: was this about a sign above the door? Or was this an opportunity to do something more – to question our very place within the city and what our programmes and our venue mean to the people who live, work and play here.” – Sarah Robertson, Communications and Special Projects Director 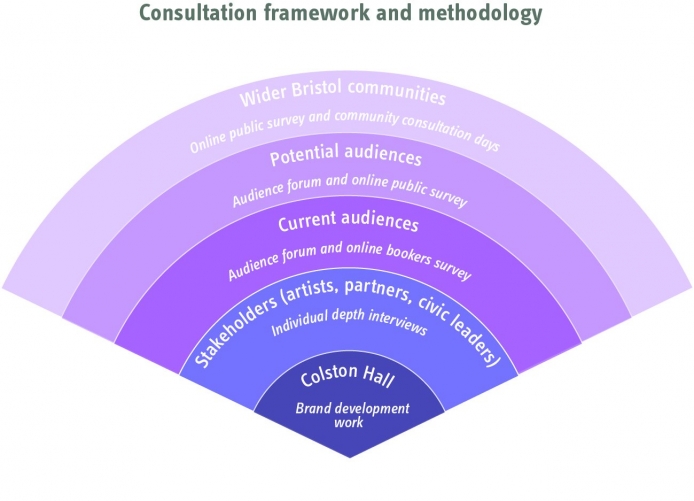 The first step was to understand the brand – the venue’s intended promise to the city. MHM held a series of brand articulation workshops with staff at all levels to get to the heart of the venue’s values, personality and the difference they want to make.

Colston Hall’s emerging brand essence, ‘unity and joy through live music’, summed up the organisation’s passion for opening up the doors of music to everyone; enabling people to grow and express themselves and facilitating experiences that can spark a life-long love of music.

“The research and consultation gave us a new perspective on our role in the city – not as a landmark, but as a living, breathing organisation made up of people with a burning passion for music and a desire to share that through our artistic, education and community programmes with as many people in the city as possible.” – Andy Boreham, Head of Marketing

But how was Colston Hall’s brand experienced and understood by stakeholders, audiences and the wider public? Using online surveys, focus groups, forums, depth interviews and community events, we captured the views of over 2,700 people across Bristol and the surrounding region. 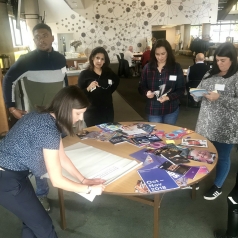 The research evidenced a significant brand gap between how Colston Hall saw itself and how it was viewed by the rest of Bristol.

Current attenders loved the venue, but most lacked awareness of the extent of the Hall’s mission, particularly in relation to what stakeholders see as sector-leading education work.

Potential attenders were similarly unaware of the Hall’s purpose, but knew even less about the breadth of the programme, dismissing it as not a place for them. Across the city, many saw Colston Hall simply as a ‘venue’ – not an organisation with heart, creativity and a cause.

Colston Hall’s physical transformation and renaming was a clear opportunity to realign the organisation’s internal vision with the city’s view of its purpose in the community.

“ The crucial perspective we gained is that we are not a static monument, but an active organisation making a difference. This gave us a huge amount of confidence, after a period of being at the eye of a PR storm, and has freed us up creatively to explore all sorts of possibilities that dramatically reshape and reposition our organisation.” – Sarah Robertson

Colston Hall knows it is dangerous to assume new audiences will come to them. It is not perceived as a natural environment by many communities, so they will always need to make the first step.

This means an ongoing partnership; one-off gestures will not do. This has implications for recruitment across the organisation, the platforms it gives to art forms and the welcome it extends to communities.

The team has built new relationships with community organisations, recruited new roles to forge those links and make them sustainable. Colston Hall has started to help move the wider conversation around Bristol’s historic legacy, diversity and inclusion forward through contributing to and hosting artistic responses and regular debates on the issues.

“We are using MHM’s recommendations to guide our creative decision-making at a senior level and to identify key artistic, education and community partners that we can work with to achieve our vision. All of this ensures that the message of unity and joy through live music is never lost, and that we leave a new legacy of which we can be rightly proud.”  – Andy Boreham

From lightning rod to Beacon

The selection process had concluded just three months after Edwards Colston’s statue had been ignominiously thrown into the harbour. The team braced themselves for more bad publicity – but it never came.  The consultation process and subsequent community engagement had paved the way for Bristolians to believe in the venue’s cause.

“The Beacon name kept coming up in the research process; it came from the people from Bristol. And that was down to the methodology: we were really open; we weren’t trying to get the research to justify a name we’d already chosen. And so it resonated, and people – some for the first time – felt ownership.” Andy Boreham