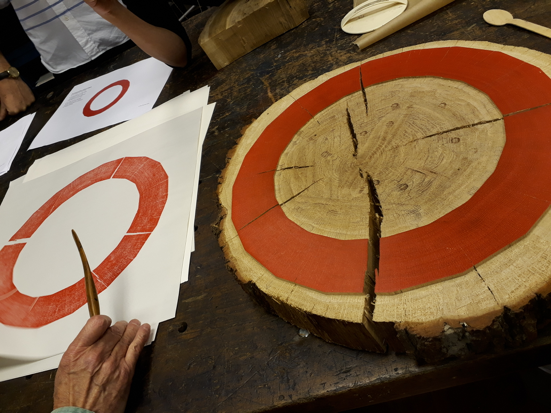 The Globe’s own teams were unable to imagine a common cause so it was no surprise the wider market was unclear what it stood for. Through organisation-wide consultation we were able to articulate a unifying brand and find an important new audience for their work.

In 2015, Shakespeare’s Globe knew it needed to understand its different audiences, visitors and participants much better.

The problem was this – Shakespeare’s Globe was operating almost as three entirely separate entities: Globe Theatre, Globe Education and Globe Tour & Exhibition. Each had its own teams, sub-brands, logos, data systems and processes but there was no agreed or articulated shared understanding of what Shakespeare’s Globe – as a whole – was for.

With this silo working, audiences themselves didn’t stand a great chance of understanding or exploring the sum of the organisation’s parts. ‘Customers’ were trapped in transactional relationships, their Globe experience dependent upon and limited to the team door through which they had entered. The rich tapestry of activity available at the Globe was not communicated, and neither was there a clear promise of what audiences would gain from these experiences.

We believe fundamentally that brand is not just about logos or visual identities. It isn’t even really about marketing. Rather, an organisation’s brand is its DNA.

Successful brands articulate a clear promise and deliver on that promise through every gesture, each and every time someone comes into contact. A successful brand can never be ‘landed’ from above. Organisation-wide consultation and creative discussion is essential.

“You might think you want a rebrand. Don’t do it without first taking a really deep dive into what your organisation – and your audiences – are all about.” Doug Buist, Head of CRM and Brand, Shakespeare’s Globe

MHM began a process of creative consultation and careful facilitation, speaking to everyone from the CEO and Trustees to the retail assistants and volunteer stewards.  We found staff were uniformly passionate about and committed to the idea of a unified Globe but they were also resigned to this being an impossible goal.

The workshops revealed a different story. Contrary to their assumptions, there were many more threads tying the staff teams and their work together than divisions pushing them apart. 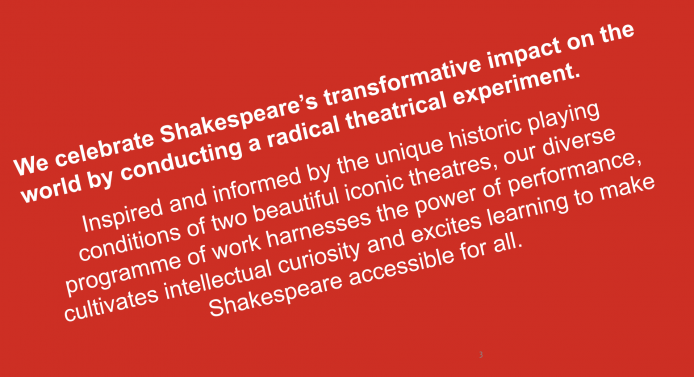 Supporting this cause statement was a Brand Model. The brand’s tenets – harnessing curiosity and learning, in unique spaces, performing, Shakespeare for all – brought together all three Globe missions (Education, Tour, and Theatre).

Central to both the model and the reality is the phrase: ‘We are one Globe.’ 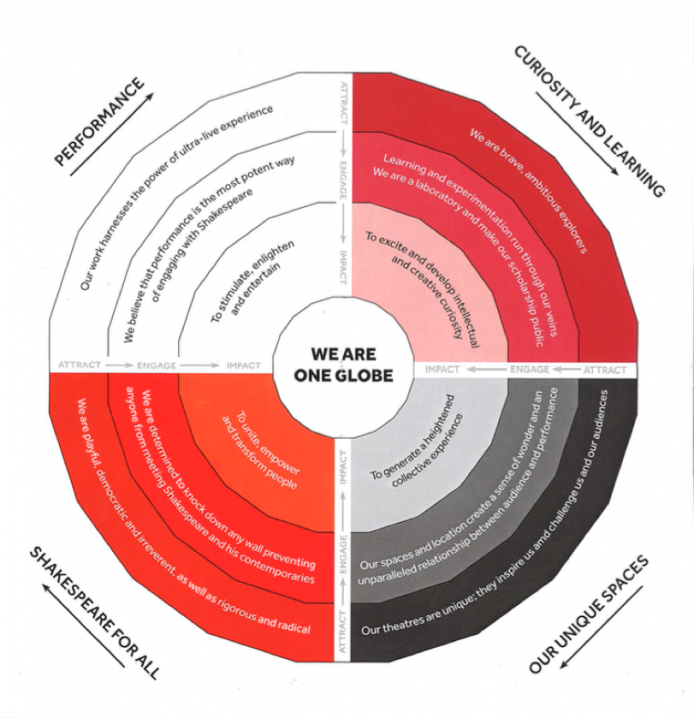 Shakespeare’s Globe’s own teams had been unable to imagine a common cause so it was no surprise that the wider market was also unclear about what it stood for. The Globe decided to use Culture Segments to investigate how it was perceived by its current and potential audiences.

Culture Segments is MHM’s psychographic segmentation system which profiles cultural audiences based on beliefs, motivations and sought outcomes. When applied to the Globe it unlocked deep understanding about its existing relationships, public perceptions and potential to connect with new audiences.

The forum revealed that Essence – a confident, independent-minded, arts-savvy segment who were over-represented in its audiences – already understood the Globe’s cause. The brand, for them, was working. Their attendance was driven by their own agenda (a love of theatre) and relatively unaffected by marketing.

But Stimulation was a segment divided.

Stimulation attenders loved the Shakespeare’s Globe experience and praised it above other performance experiences. The Globe’s brand tenets perfectly matched their psychographic profile. This was a radical experiment – and that is why they came.

Stimulation non-attenders, however, were choosing not to visit because they assumed the Globe would be traditional, old fashioned and more for tourists wanting to see something ‘English’. They had no clue that their idea of a great experience was what the Globe was actually offering.

Shakespeare’s Globe’s new visual identity had to respect and reflect the complexity of Shakespeare’s work. It needed the Globe’s cause running through and it had to close the brand gap – keeping the Essence audience engaged while drawing in, exciting and inspiring a new Simulation audience.

Working closely with MHM, The Partners (now Superunion) produced a breath-taking new visual identity that was inspired by the Globe’s cause, driven by its brand model and underpinned by Culture Segments insight.

Using the last complete piece of oak from the new building’s construction, the designers created a printing block in the 20-sided shape of the theatre. Shakespeare’s Globe’s new visual identity marries old and new, embraces experimentation, reflects the Globe’s unique spaces, and – in its authenticity and inclusivity – resonates with both Essence and Stimulation groups.

Breathing life into the brand

The ‘We are One Globe’ mantra is proudly delivered in its marketing.  For the first time, the Globe’s Summer 2018 season brochure contained all activity from its three houses. Events were interwoven by theme rather than department. The brochure’s page on Othello were not followed by another theatrical production but by the public education Shakespeare and Race week, curated by the research team.

Armed with the new branding and understanding of the audiences closest to their cause, the Globe’s marketing team has set about attacking the perception gap in Stimulation non-attenders. The promotional video for the play Emilia is a great example: it centres around a big idea, builds a sense of event and anticipation, is deliberately intriguing but doesn’t offer any spoilers.

“The moment when everything clicked was understanding the Culture Segments. ‘Getting’ Stimulation was the key.” – Doug Buist

Shakespeare’s Globe is now an organisation with a common cause.

By interrogating their own purpose, using Culture Segments as the lens through which to understand their audience, and by using the audience to guide their internal change, Shakespeare’s Globe is now the ultimate cause-led and audience-focused 21st-century arts organisation.

‘One feast. One house. One mutual happiness.’